To 6th Battalion who March Out in Full War Kit. 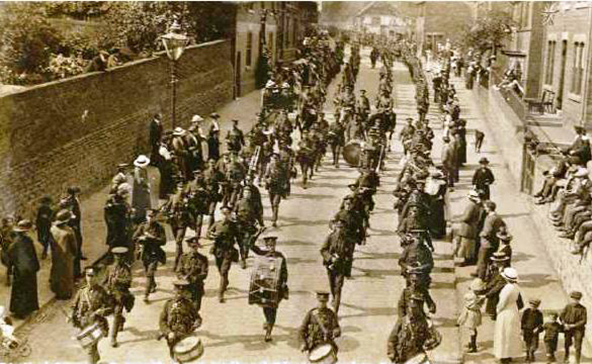 Chesterfield was very proud of the 6th Battalion Notts and Derbyshire Regiment and the Derbyshire Yeomanry who marched out of the town in full war kit on Monday. It is the first time in its history that the old Borough has witnessed such a scene and it did honour worthily to the occasion. The time of the departure of the men and the route to be traversed were announced in a special edition of The Derbyshire Times on Monday morning, and at once the residents put out their flags and made preparations to give the men a hearty send-off. The route was lined by thousands of people and the scene will not be forgotten. The men looked fit and well, and marched briskly not withstanding their 56 lb load which each had to carry. The route was via Saltergate, Glumangate, High Street, Burlington Street, Stephenson Place and St. Mary’s Gate.

The Companies were formed in the Central School Playground and at 1.30 p.m. the Band, under Band Sergeant Bramwell marched nearly to Marsden Street, preceded by the corps of cyclists despatch-riders, signallers and buglers, and followed by a contingent of troops.

A halt was called until the other companies formed into position and little delay was occasioned.

At 1,45p.m. the men reached from Marsden Street to the Drill Hall. Amid frantic cheers, the waving of flags, and the clapping of hands, the Band struck up a national air. The battalion with swinging steps, then commenced their journey. The men marched particularly well, the discipline was perfect and the bronzed, happy faces were pleasing to behold.

Among the ranks were noticed several recruits who had not been provided with their khaki uniforms.

The rear of the Battalion was brought up by two field guns and about twenty spare horses which had been commandeered from local tradesmen and others, and four heavy drays, belonging to the Brampton Brewing Company, John Smith’s Brewery, Chesterfield and Messrs. Edward Wragg and Sons, Chesterfield, heavily laden with ammunition etc. Behind them came the Derbyshire yeomanry, but owing to the distance between infantry and the mounted men, many sightseers had left the route before their arrival and thus missed the fine spectacle the yeomen who were splendidly mounted, presented. 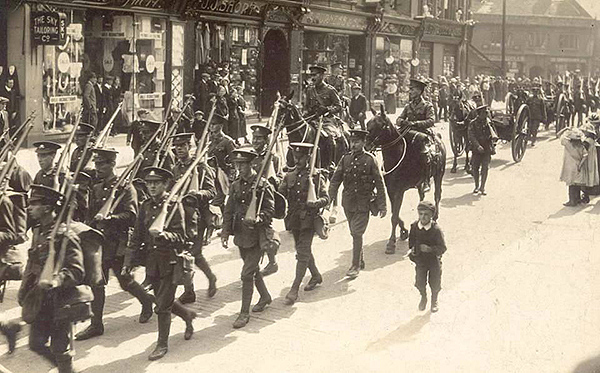 A striking figure among the Bakewell company was Capt. Blackwell, whose great height towered above his men. He saw much service in the Boer War and many exploits of strength and endurance are told of him in the Battalion. Here and there the South African ribbon could also be seen in the ranks, but the battalion is composed chiefly of men who have yet to win their spurs in warfare and that they will, as worthily uphold the honour of their King and Country as their predecessors did in South Africa, All Derbyshire knows.

Incidents: The men were in high spirits. While they were waiting in Saltergate one section heartily sang “It’s a long way to Tipperary.” to the accompaniment of a mouth organ.

One man at the corner of St. Margarets Drive, in his efforts to see the march past, pushed his elbow through a window, shattering the pane to atoms.

Two Chesterfield Corporation motor ‘buses were noticed outside the Drill Hall, they had been requisitioned to carry ammunition, and on Sunday the seats were removed and the floors specially strengthened. It was afterwards found that they were not needed.

Two Chesterfield Corporation Water carts were commandeered and taken by the troops.