The following formed part of David’s contribution to the recent exhibition at the Peacock Centre (1998) but I thought I would include it for the benefit of those who were unable to visit the exhibition. 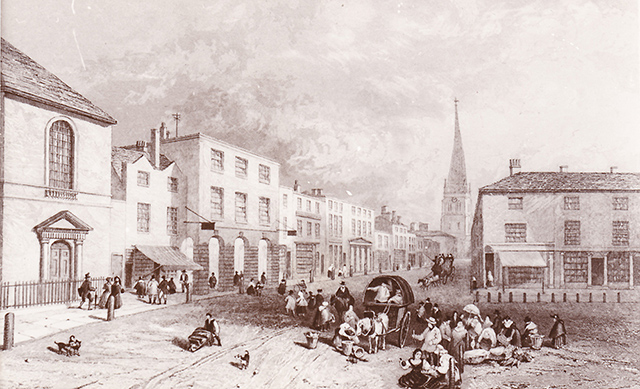 After this slight diversion something should be said about the general trade of the town apart from the leading industries which have been mentioned.

In 1204 King John granted a charter constituting Chesterfield a free borough, and establishing “one Fair every year, on the Feast of the Exaltation of the Holy Cross, to continue for the space of eight days” and a Market every Tuesday and Saturday “with all liberties and customs to a Fair and Markets appertaining” and in 1294 Edward 1 granted a Guild of Merchants to the town. These charters were confirmed by several subsequent sovereigns and in 1598 a new charter was granted by Queen Elizabeth providing amongst other matters, that the Mayor “shall have power and authority of taking recognizances, according to the form of the statute of Acton Burnell and according to the form of the statute of Merchants.”

Mention has been made of the battle of Chesterfield in 1266 in which the King’s forces defeated those of Robert de Ferrers, Earl of Derby. The latter took refuge in the Church, hiding amongst some bags of wool deposited there in readiness for the fair. To appropriate a sacred edifice as a warehouse strikes us as incongruous but apparently our ancestors had other views, for Dr. Cox, the eminent ecclesiastical authority, says that “the devotion of churches to secular uses in the Middle Ages was not only not regarded as reprehensible but there is no reasonable doubt that the main object and intention of building the large naves to our churches was for the very purpose of utilising them as town halls, courts of assize, market houses, granaries and store-houses in troublesome times, and even as suitable buildings for holding fairs and revels.”

In the same century the sale of woollen and linen cloth in Chesterfield was restricted to burgesses, except during the eight days of the fair. In course of time several Traders’ Guilds were established in the town, and each had its own regulations, some of which are very quaint and amusing. A butcher, for instance, was prohibited from selling pork between “the feast day of Philip and Jacob commonly called May Day and the feast of St. Martin commonly called Martlemas.” for selling “measled pork” or rotten mutton” and he was fined 5s. “for every such pork” and 2s. “for every such mutton” and later on it was stipulated in order that the public should know who killed bull beef that every bull before being killed should be baited in the market-place, the intimation being given that “the chain and collar may be had for fetching”

Persons who used the “mystery and occupation of tailor” were required, on due notice, to work at any private house under a penalty of 13s4d. and for working on the Sabbath Day a fine of 10s. was incurred. Each trader was required to stick rigidly to his own occupation and not trespass upon that of his neighbour so that a tailor could not sell “any trimmings wares or commodities whatsoever towards making up any garment.” except for finishing clothes for his own customers.

The guilds were the forerunners of Friendly Societies, for a contribution was levied quarterly on each member “towards the relief of the poor, sick, lame and impotent of the said mysteries within the borough.” No one was allowed to start any business unless he had served an apprenticeship on the completion of which he was required to present to the Mayor a piece of silver – usually a spoon – of a value varying from 6s.8d. to 12s. As may be imagined the Corporation accumulated a good stock of spoons, and in 1669 they had them all melted down and converted into the handsome silver mace which now adorns all civic processions. 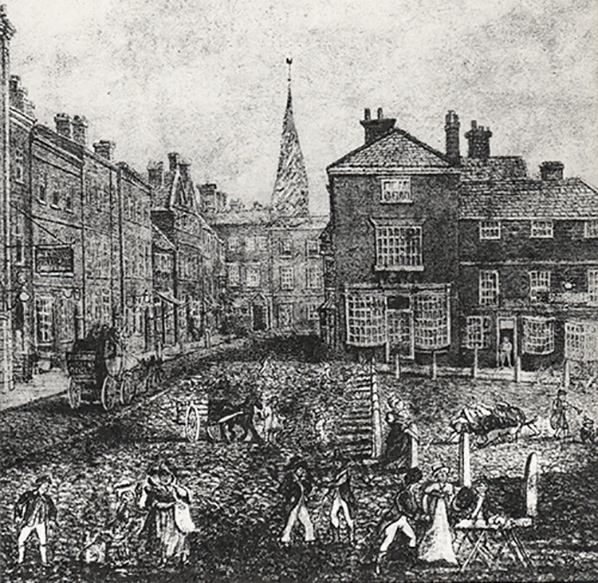 In 1803 Chesterfield became a depot for French prisoners captured in the long struggle with Napoleon and they introduced a new industry into the town – that of glove-making – but a few years after their departure in 1814 it died out.

Farey enumerates in great details the manufacturers of Derbyshire at the beginning of the nineteenth century, and from his list it appears that Chesterfield was the only place in which carpet-weaving was carried on, and that it was also the only place outside the county town where a silk-spinning mill was in existence. Hat-making was another industry which has disappeared and Beaver Place (now covered by the Great Central Market Place Station) indicates where the once popular beaver hats were fashioned.

There were flax-spinning mills at Brampton and Holymoorside, manufactories of bridle-bits and buckles of cast iron at Brampton and of steel at Bolsover, cutlery works both at Chesterfield and Brampton and several lace factories and a number of stocking-weaving mills both in the town and the neighbourhood around.

A number of the old bells in our parish churches have Chesterfield as their place or origin and for many years there was a very successful sewing-cotton factory and dye-works for colouring the cotton at Holymoorside. This concern was absorbed by the English Sewing Cotton Company and its remoteness from railway accommodation led to the business being transferred and distributed amongst other branches of the combine.