Mr A Greenhough was the Headmaster of William Rhodes Senior School from when it opened in 1931 until 1938 when he became the Deputy Borough Education Officer, before becoming Borough Education Officer in 1942. In 1952 he instigated the award of the Greenhough Medallion to be presented annually, usually at Speech Day and Prize Giving, to a pupil or member of staff whether past or present who, by their service or achievement, had enhanced the reputation of the school. 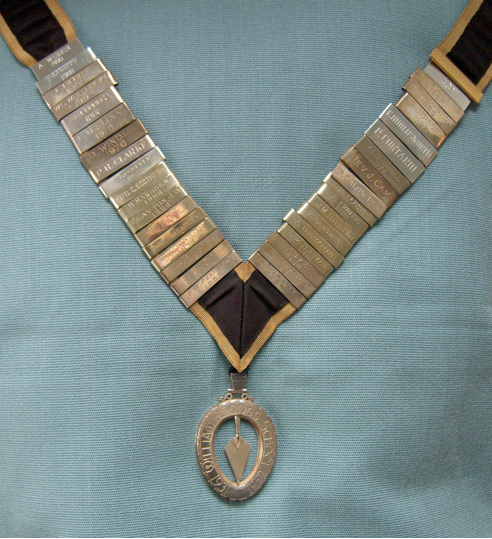 The first recipient was P.W.Pearson in 1953, deputy headmaster at the time, who had recently been awarded the Royal Humane Society testimonial for an attempted rescue of a man from the sea in Cornwall. Other recipients included headmaster A.N. Crookes; long serving art master C.Scothern; and D. Windle who followed his father as teacher at the school, forming the school band about 1969 which developed into Rhodian Brass. Not all were masters – P.R. Clarke, was the first student to get into Cambridge University; F.Lowe was the no doubt long suffering caretaker and Lisa Dunks was the only female recipient after girls were admitted into the school in the 1980s. The last recipient was W.T.Chappell, who donated the medallion to the Museum. 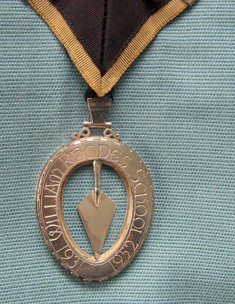 Following the 1945 Education Act Chesterfield Borough Council produced an ambitious development plan for education within the borough. Included in the plan was the idea that the William Rhodes and Peter Webster schools should concentrate on applied science and crafts, with William Rhodes concentrating on engineering and building, and Peter Webster concentrating on engineering and mining. The Junior Technical College, which was housed at Towndrow Mill on Lordsmill Street was to disappear and the students absorbed into the two schools.

This necessitated an extensive building programme at William Rhodes and a sizeable extension housing a chemistry lab, metalworking and woodworking shops was opened in 1950. Until 1948 the Council Works Depot was adjacent to the rear entrance to the school on Boythorpe Mount and this may be where the building classes were held after the depot moved out in 1948. Finally in 1952 a new dining room was opened.

This could have been the completion of the building work at that time. It could also account for the design of the medallion, which is inscribe ‘William Rhodes School 1931-1952’ and incorporates a brick-layer’s trowel.