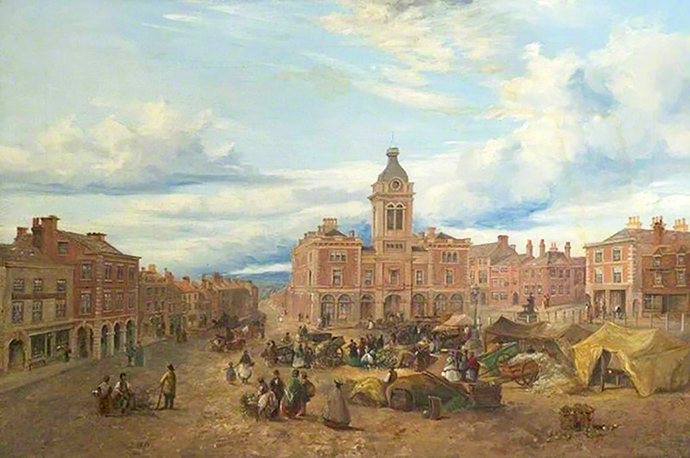 The aims of the Society are:

In September 1989 a group of regular users of local studies collection at Chesterfield Library held the first meeting of the Society in the library. As the numbers increased the meetings were transferred to the Lecture Theatre but this was really too big and another move was made to the Urban Studies Centre in the Market Hall before moving to the United Reformed Church on Rose Hill.

First the Society met upstairs then downstairs until 2009 when the School of Dance was formed in the Eastwood Building and the Society moved to a smaller room behind the church. Although the number of people attending meetings was falling this room was really too small for the purpose but in late 2016 the Society was able to hold its meetings in the church.

The numbers attending meetings increased and meetings were held throughout the year except January. The future looked bright but the meeting in March 2020 was cancelled because of the Covid pandemic and the roof of the church was found to be unsound.

Meetings began again in September 2021 in a new home at St Thomas Centre on Chatsworth Road.

Mounting display at exhibitions is another area in which the Society has been active.

An exhibition was held at the Winding Wheel in January 1992 for which there was a very large attendance – and this resulted in the Society gaining many new members. A year later a second successful Exhibition was organised by the Society with other local history Societies taking part.

The Society has also  exhibited at a number of history fairs including those organised by the Derbyshire Victoria County History Trust, BBC Radio Sheffield, Chesterfield & District Family History Society and Chesterfield Museum.

The Society produces publications and a regular newsletter.

The Society can be proud of its achievements. In a changing world let us hope that the work will continue.

Chronicle of our town’s history